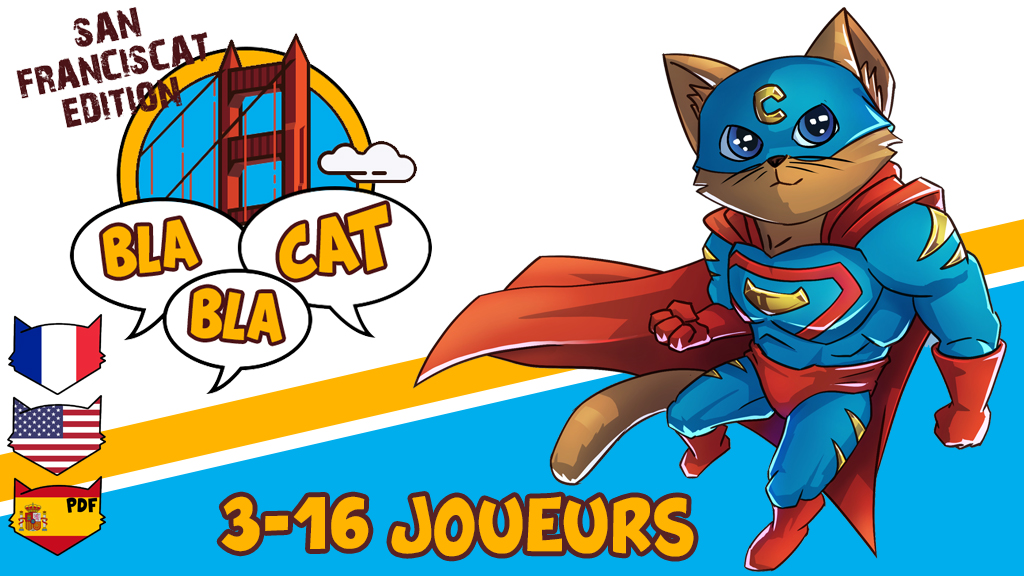 BLA BLA CAT is a game of atmosphere, debate and bad faith.
Try to win the Goldenfish.
But don't worry, even beaten, you will have a decisive role until the end.

Once a decade, a major competition is held in which participants flock from all over the world in the hope of winning an extraordinary prize: the GoldenFish, a trophy that guarantees its holder an abundance of fish for the rest of his life. But to be the lucky one, you have to succeed in standing out, outclassing your opponents in fiery verbal jousts. Be careful, however, because there are many low blows and uncompromising jurors.

You can download a raw version of the rules in French, English or Spanish by clicking on the flags below.

The tournament consists of rounds whose number varies depending on the number of players. Each round is divided into matches. These are between two players who must plead the pros and cons on a subject given by the jury (all other players).

Now you're ready to play, good luck. Be charismatic, smart, vicious… Be the big winner of this edition of BLA BLA CAT.

If the game is funded, we can unlock new things. There will be both hardware improvements, but also new content. The unlocked bonuses will be free for all supports, but they will be sold after the campaign as an extension. (The first tier is exclusive to the campaign, it will not be present in the extension.)

The game was designed for 6 to 16 players, but we have since created new rules for 3 to 5 players: welcome to the Bla Bla League.

There is only one level of commitment. If you want to buy more than one game, we will try to reduce shipping costs.

We can't offer you the shipping costs completely (sorry), but we've tried to minimize them.